Perhaps because there is still no clear diagnosis among the scientists and veterinarians working with head shaking. The suspected diagnoses range from herpes to dental problems. The investigation methods and proposed solutions are just as complex as the suspected diagnoses, and sometimes just as bizarre.

In my opinion, for the examination of patients there are few general directives and this applies to human medicine, such as veterinary medicine:

1. Open your eyes and ears, all other senses and especially the brain too before switching on any technical diagnostical devices.

2. Leave the church in the village and start with the most likely diagnosis. Rare diseases are possible and certainly very prestigious, but as mentioned earlier they are that: rare.

3. Looking beyond our own horizons, this is especially true for us veterinarians. Much of what we think is completely new and justifies an immense research effort (which, by the way, is often at the expense of patients or laboratory animals) already exists in human medicine. We don’t break a tooth from the crown to read up there.

Apropos see what our human colleagues have to say

Perhaps the first thing we should be aware of is that Head Shaking is not a disease. It’s a symptom and a very vague one at that. Shaking a horse’s head can mean so much.
On the pasture when it raves it expresses surely exuberance with it. Or it shakes its head to ward off flies.
Under the rider it can mean a hard hand, or an unsuitable saddle, or pain in the back.

Exactly like, by the way, tail slapping. Why don’t we actually make a disease out of tail slapping? The horse thus expresses at least as much pain or discomfort as he does with his head shaking. The only difference is that we don’t mind tail slapping so much if we absolutely want to ride.

Back to Head Shaking. 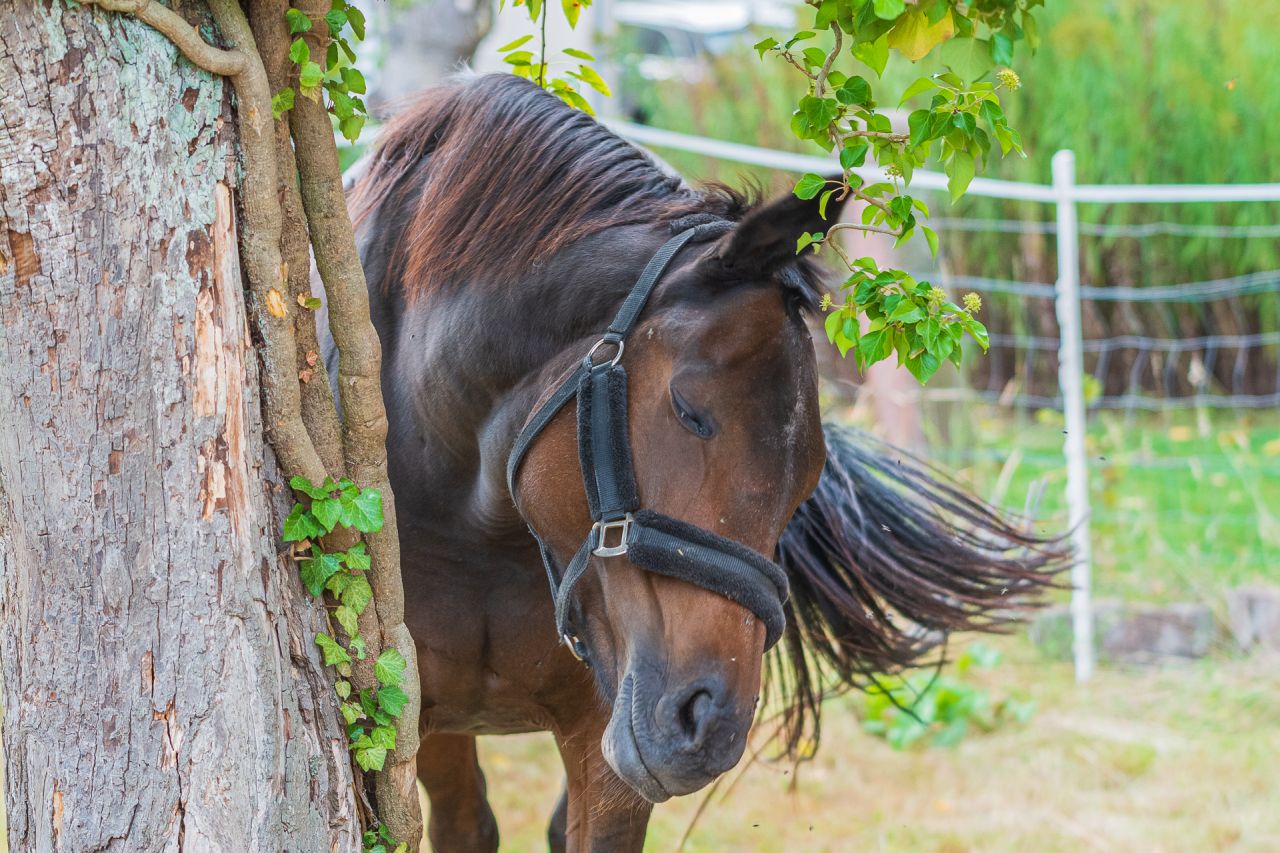 We speak of head shaking when this symptom becomes permanent, with or without a rider. And we gradually agree on the cause. One assumes an irritation of the trigeminal nerve. And they found out, that there is mostly no structural change in the nerve. Sad for school medicine, good for us.

With a Head Shaker, dental examination would perhaps be the first choice for me as a veterinarian.
Right after looking into the horses ears and eyes.
And an x-ray of the head might not be so wrong. Then I can even switch on a device.
If I don’t find anything then I would let a good osteopath of my trust treat the whole horse once.

Because in human osteopathy there is a complex of symptoms that is very similar to that of Head Shaking.

If you can, you can even see it in a computertomography. The doctors of human medicine can do that. 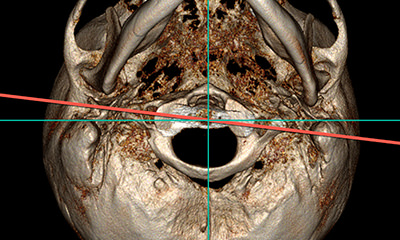 Computertomographic Image of an 1. cervical vertebra (Atlas) that sits not correctly centered in its joint. The red line goes through bouth lateral blades of the atlas and shows that its not horizontal (green line)

This is not an esoteric diagnosis that cannot also be detected in imaging procedures.
What is controversial discussed is the effect of this disease on humans.
Here are the most common problems in humans

Ring any bells? Besides the one in the ear, I mean.

If I think about what a horse with tinnitus, noise in the ear, headaches or balance problems would do with his head – if I would be the horse I would shake my head if I could not express my problems vocally – then I think my first walk with a headshaker would be to an osteotherapist.

If I then go through my documents and look up which osteopathic lesions I have found in all “my” head shakers, namely

then I think both syndrome complexes really look alike.

Further effects of the atlas blockade

A lesion of the atlas cannot only affect the motor system. They also can have a disturbing effect on the sympathetic nervous system (vagus nerve).
This then leads to disorders of the gastrointestinal tract (disturbed peristalsis, stomach problems, altered intestinal flora > vitamin imbalance, immune system!!) but also to cardiac arrhythmia and changes in blood pressure.

Now please do not think of an atlas blockade with every colic and heart problem and call the osteotherapist or chiropractor. As mentioned before, always from the most probable diagnosis to the less probable one. There are many causes that are more likely to cause colic than atlas blockage. But when a horse colics over and over again and you can’t find anything else, you can start thinking about an osteopathic problem probably in the lumbal spine and long after that you can think about an atlas blockage.

I also don’t want to say that every Head Shaker is an osteopathic case.

But what I want to say is that many Head Shakers “just” have an osteopathic problem. A problem that can be solved with some time and understanding.
Without scinthigraphy, without anaesthesia and fuss like head shaker juices and some standard herbal mixtures.
Don’t get me wrong, I am a big fan of phytotherapy, and in order to dampen the stimulus of the trigeminal nerve a little and to relieve the pain you can also work with individually composed herbs, but that alone is no solution.
You only fight the symptom and not the cause.