Is there flexion in the spine? And what does it do.

Yes, it really does exist, the flexion of the spine. Contrary to what some coaches claim.

The abdominal muscles and the diaphragm muscles are involved in both the flexion of the spine and its maintenance, as well as its rotation and lateral inclination. However, these movements are fine-tuned by the muscles and ligaments of the spine. These muscles are also involved in the distribution of the rider’s weight as well as the momentum of forward movement on the most important shock-absorbing structures of the horse’s body. Namely the shoulder girdle, facilities of the Energy Storing System of the anterior limb (flexor tendon) and the ligamentous apparatus of the sacroiliac joint.

There is first of all the M. longissimus dorsi.

It can be divided into three sections (neck part, chest part and lumbar part) and runs, always spanning 3-5 vertebrae (segments), from dorsal back (processus spinous of the vertebra) obliquely forward ventrally.
This is important to know, because it straightens the spinous processes (extension of the spine) according to its anatomical position. The Iliocoatalis (also consisting of the 3 parts) is besides its function as an erector of the vertebrae also an auxiliary respiratory muscle (high tone in this muscle > effect on the respiration).

Then we need to look at the M. multifidii.

In order to bend the spine in a stretched posture, the M. multifidii work in concentric (shortening) work. The M longissimus dorsi and the M. iliocostalis however in eccentric (strain).

Another important stabilizer of the posterior thoracic and lumbar spine is the M. iliopsoas.

It consists of the superficial and deep part of the psoas major muscle (starts at transverse processes of the last thoracic vertebrae and those of the lumbar vertebrae and moves to the inner side of the femur). The second part is the iliac muscle, which goes from the inside of the pelvic ring to the inside of the femur. The iliopsoas is spatially very closely connected to the Plexus lumbalis. It provides the nerve supply to a major part of the muscles and skin of the hind limbs, but also to the reproductive system and parts of the abdominal wall.
So you can imagine what lesions of this nerve network due to lesions in the iliopsoas muscle mean for the hindquarters, the abdominal muscles and reproductive system of the horse.

The M. latissimus dorsi also affects the stability of the spine.

It extends from the fascia thoracolumbalis (located in the area of the lumbar and thoracic spine next to the spine and covers the lumbar region) and attaches itself from the outside around the upper arm in front of the shoulder joint. Lesions in the latissimus lead to an extension of the spine, a reduced extension of the shoulder joint and a disturbance of the internal rotation. A common lesion in my practice. Horses with a hypertension in the latissimus show a distinct hollow behind the shoulder blade on both sides or particular one sided and show a much more pronounced lower body line than upper body line. In addition, the back appears slightly hanging.

These are the symptoms of hypertension in the M. latissumus dorsi. Nevertheless, the latissimus is an important muscle in straightening. So you see how in medicine: the dose makes the poison. Tonus yes, training too, but no hypertension.

What makes the arching of the back or flexion of the spine possible for our horse? 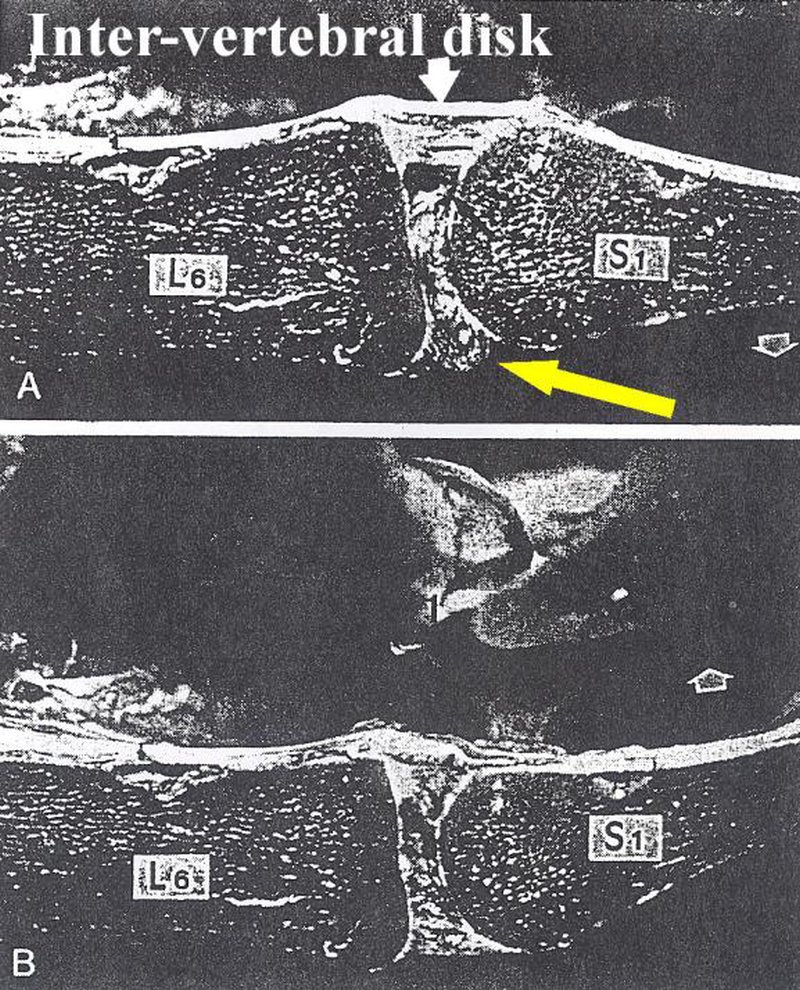 From: Science in Motion

Flexion or better stretched posture of the spine and especially the neck shifts the Instant Center of Rotation forward. The Instant Center of Rotation is the axis around which the vertebra performs all movement (flexion, rotation and lateral inclination). In my opinion, this English formulation is the origin of the mistaken belief that there is no flexion and extension movement in the spine with some trainers.

1.In flexion, the amplitude of lateral inclination and rotation of the spine is increased, which means our horse can bend more easily.
2. The load on the intervertebral discs, especially between LW 5 and sacrum, is reduced by the stretching posture in flexion.
3. The load on the small vertebral joints (facet joints) decreases the further the Instant Center of Rotation moves forward in flexion and vice versa.
From: The relation between the instantaneous center of rotation and facet joint forces – A finite element analysis.
Schmidt H1, this year F, Claes L, Wilke HJ.

Why is flexion and stretch posture so important for the riding horse?

Apart from the fact that this posture makes it easier for our horses to bend, breaking impact is of fundamental importance for the training and use of our riding horse. 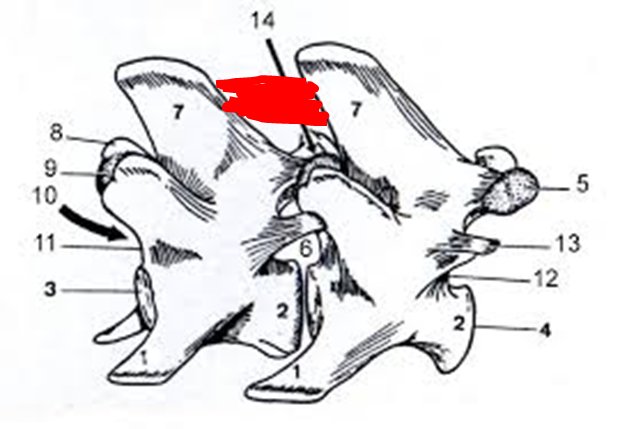 The ligamentum longitudinale dorsal – spanned while the spine is in flexion – serves as the main shock-breaking device of the spine. It is physiologically stretched by the flecting muscles of the horse (no overstretching possible). Of course the M. multifidii are involved in the fine tuning. In contrast to the ligamentous apparatus, which does not fatigue, the permanent tension of the M. multifidii would lead to fatigue of these muscles. The stretching of the dorsal ligamentous apparatus through back and abdominal muscles thus creates a fatigue-free carrying apparatus, while the individual muscle groups involved in flexion, depending on the movement, can tense and relax again and again.

In order to function correctly, muscles must return to their resting or initial tone after contraction. Otherwise cramps, muscle cramps or muscle injuries may occur. And from this osteopathic problems and changed basic tensions of the muscles.

Ligaments have receptors for overstretching injuries, which cause the surrounding musculature to relieve the injured ligament by an increased tone in the corresponding muscle groups. 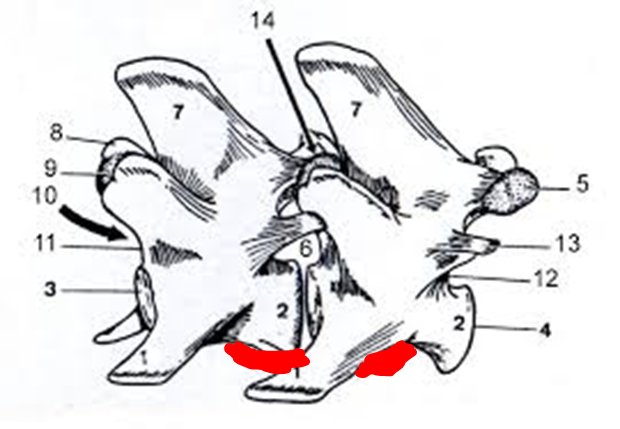 The Ligamentum longitudinale dorsale is completed by the Ligamentum longitudinale ventrale.
In contrast to the dorsal ligament, however, this is stretched by an impact from above and thus limits the approximation of the spinous processes. The amplitude of the stretching is not physiologically influenced by the muscles themselves, but by external influences that cannot be controlled by the horse. This ligament can very well be overstretched and thus be damaged. Overstretching causes a reaction of the stretch receptors and stiffening of the affected area of the spine by the surrounding muscles.

This applies in particular to the sacroiliac joint.
The sacrum is freely suspended between the pelvic belt. A massive ligamentous apparatus is responsible for its stabilization, but also for its free and high mobility. Until now it has been assumed that ligaments have only very few pain-sensitive structures. This is probably not true for some of the ligaments of the sacroiliac joint, they are extremely well nerved.

Now ligaments, which are relieved by the hypertension of individual muscles, could be protected and healed. On the contrary. The increased muscle tone reduces blood circulation in the damaged area and prevents healing. Therefore, it makes sense to release lesions shortly after the injury.

I am often asked why almost all horses always have something with the sacroiliac joint.

That’s why.
It is the point with the greatest mobility, the highest shear load and the transition between different load effects: Extremity (vertical) to spine (horizontal).

The overstretching of the longitudinal ventral ligament triggers activation of the receptors in the ligament. These have an immediate effect on the muscles stabilizing the spine, especially on the longissimus, iliocostalis and iliopsaos muscles. The spine and the sacroiliac joint are immediately stiffened, fine tuning is no longer possible. To counteract injury to the highly mobile sacroiliac joint, lesions are created there.
Lesions are actually stabilization attempts in areas affected by overload.

I will certainly write another chapter on lesions of the sacroiliac joint.