Contact betwee the rider`s hand and the horse`s mouth is a much discussed topic.

The German word for contact is such an excellent descriptive word. Literally translated it means “leaning against”. As you can imagine, it has nothing to do with tugging or pulling, coercion or pressure.
Contact means that the horse itself leans against the rider’s hand in a trusting and relaxed manner. Here again I would like to emphasize the word “itself”, as you probably heard in “balancing themselves” and “carrying themselves”. In my opinion, “itself” plays an important role in the first three training levels, which is always misunderstood in horse training.

Balancing oneself means: I do not clamp my horse between both thighs and push it into a wrong balance. I let it find its own balance and try to sit as correctly as possible, to disturb it as little as possible and to adapt to its movements and balance.

Letting oneself carry doesn’t mean: I put my hand where I think the place where the horse carries itself is, because that’s almost always wrong anyway. Rather, it means that I am able to feel how much the horse can already stabilize itself in the torso and where it can hold its head most comfortably and stably. Above all, however, this means to recognize when the horse has to adapt its head posture because the muscles become tired (depending on the state of training and not on the time the rider has given).

Not recognizing fatigue states and missing the small moment when a young or untrained horse tries to adopt the correct posture are the main mistakes in the training of the horse.
If the release from an uncomfortable posture and the praise for a correct attempt come too late, days, if not weeks, of good previous training will go down the drain. It is the job of a good rider or trainer to recognize these times and act accordingly.
As a riding instructor or course leader, I don’t care if someone has booked an hour of riding lessons with me. If, after 15 minutes of warm up, the horse can no longer adopt certain postures due to signs of fatigue, I have to end the lesson.
If I notice as a rider that the horse is – after the third jump over a small obstacle – tense in the area of the muscles of the torso, then I have to finish the training. And if somebody doesn’t feel that himself, then he has to get help and not train alone.

Once again, I have strayed from the subject, but it’s difficult to separate all t. So contact means that the horse looks for leaning against the rider’s hand on its own.

Before the horse can find contact, it must be able to keep its rhythm (otherwise it will be much more difficult for the rider to follow the movements of the head with his hand) and it must be supple and in balance, otherwise it will not look for contact on its own. The attempt to “give contact to the horse” so that he can (or must) accept it or “leave ones hand standing” to ride a particular lesson is fundamentally doomed to failure. A restriction of the free movement of the head is always a restriction of the movement of the entire horse body.

How much the horse’s head moves depends on how well a horse can stabilise itself in the torso. The complete stabilization of the trunk and thus the reduction of the radius of the head movement can only be achieved after successful straightening. This, by the way, is only expressly necessary in class M. The complete stabilization of the trunk is also the basic prerequisite for straightening. That’s why I find it absurd and downright stupid to demand “collectional work” from riders in the levels up to class L. Up to these classes a loosely dropped 6th/7th cervical vertebra, a neck in stretching position with stretched ganache area (nose in front of the vertical) and the neck/head in free unrestricted mobility must be the highest goal.

And last but not least, contact has something to do with a basis of trust between horse and rider. Without reliable behaviour on the part of the rider, without knowledge about the horse’s movements and the physical ability to follow those movements and without understanding the nature of the horse, we will not achieve this relationship of trust. 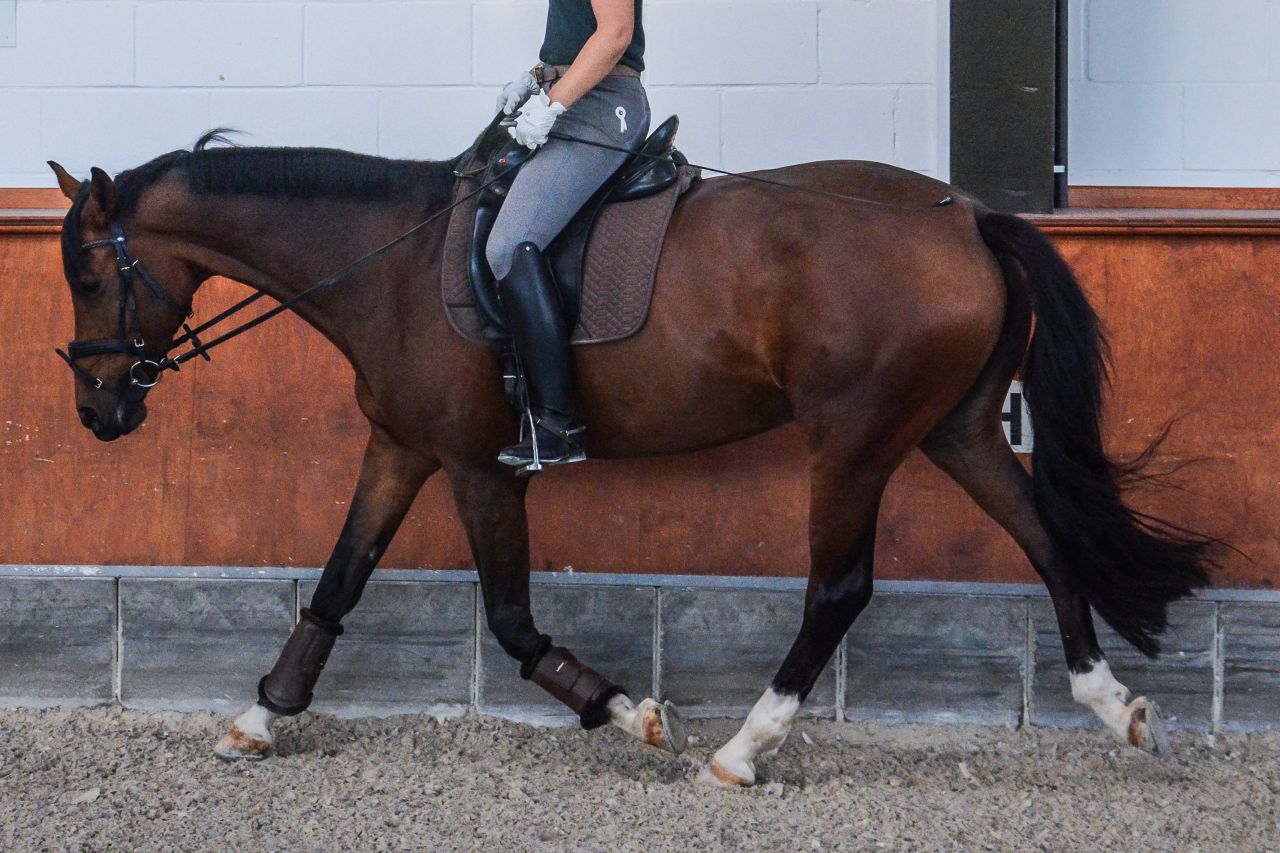 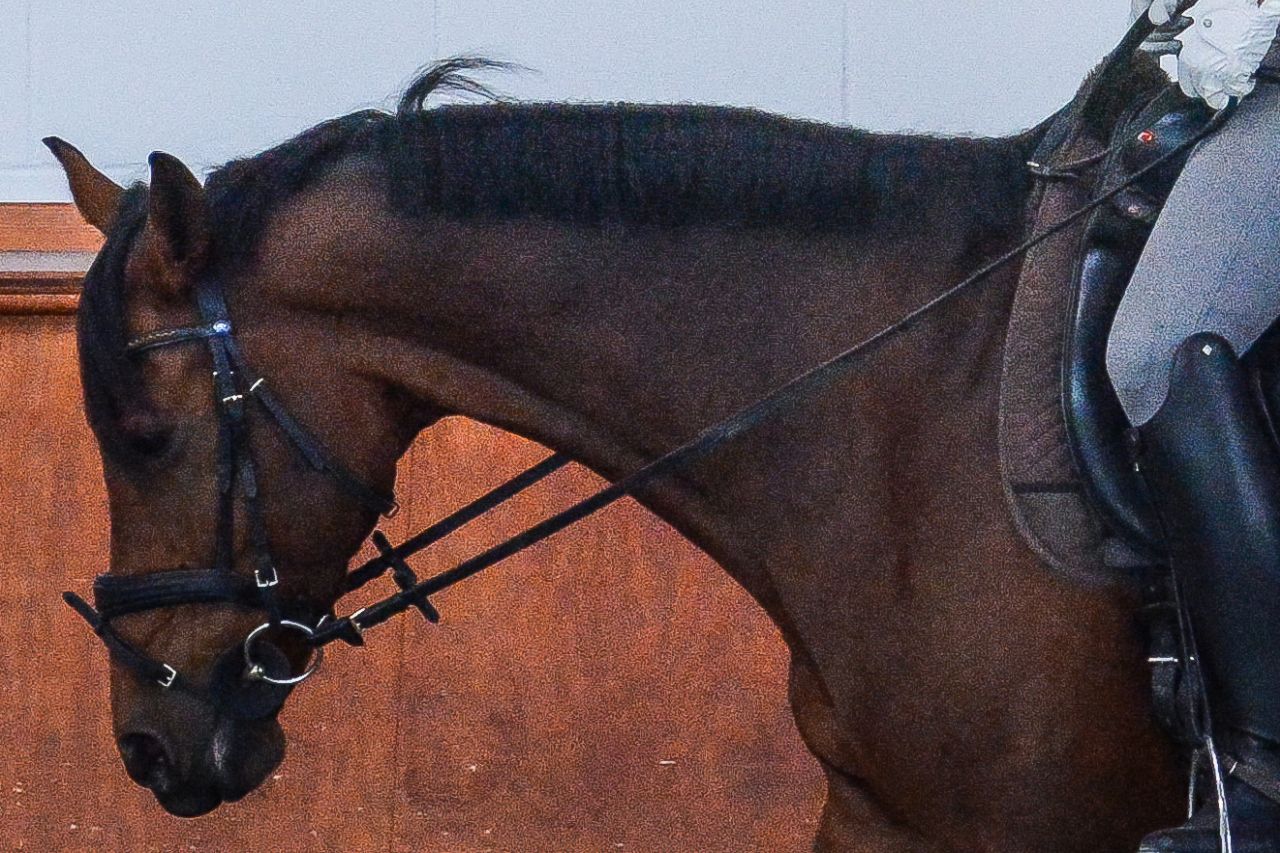 Horse with slightly too little stretch in the ganache, thus the upper neck muscles are only activated in the front part (neck). In the lower part of the neck the tonus predominates in the lower neck muscles, trunk carriers (M. serratus ventralis cervicis) are not activated. The horse “falls” down between the shoulder blades, the withers appear deeper than the upper contour of the hindquarters, horse does not carry itself. The horse falls slightly on the forehand, the forehead line is slightly behind the vertical. The problem may be due to the rider’s hand pressed against her thigh, which is not carried freely and is therefore flexible enough. 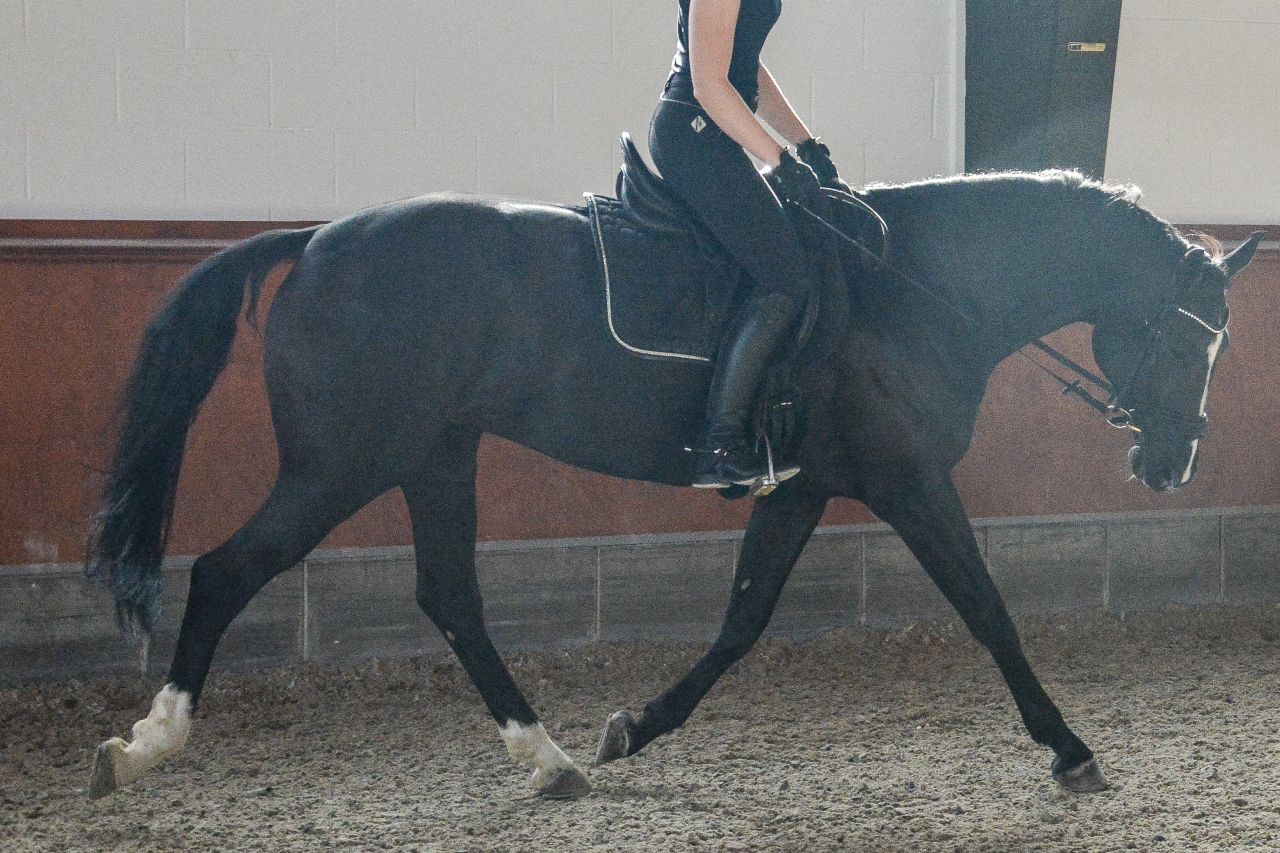 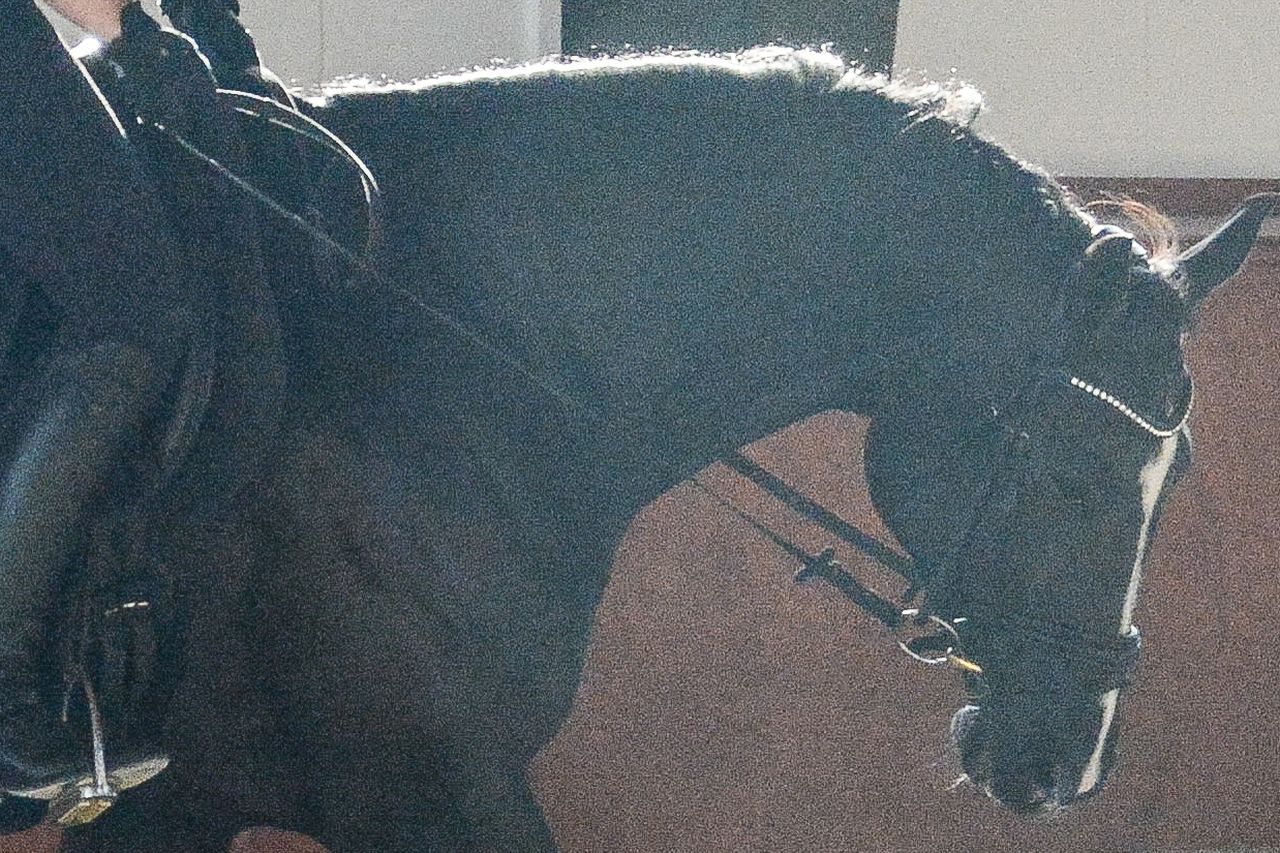 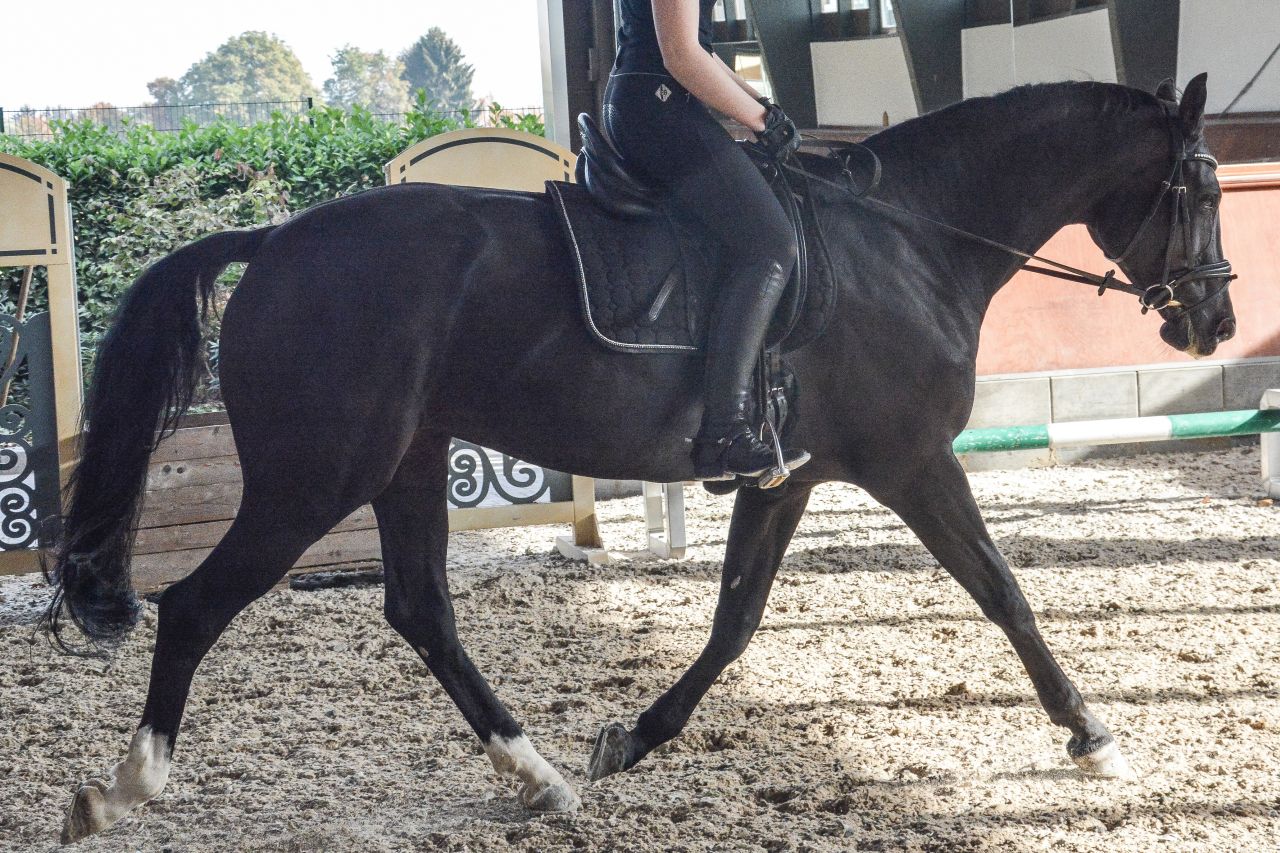 Rider under instructions: Hand carried and flexible. Head in front of the vertical, upper neck musculature more active (could be more especially in the lower neck area), neck almost highest point, horse begins to carrie itself and looks for leaning forward and not backward as in the previous pictures. 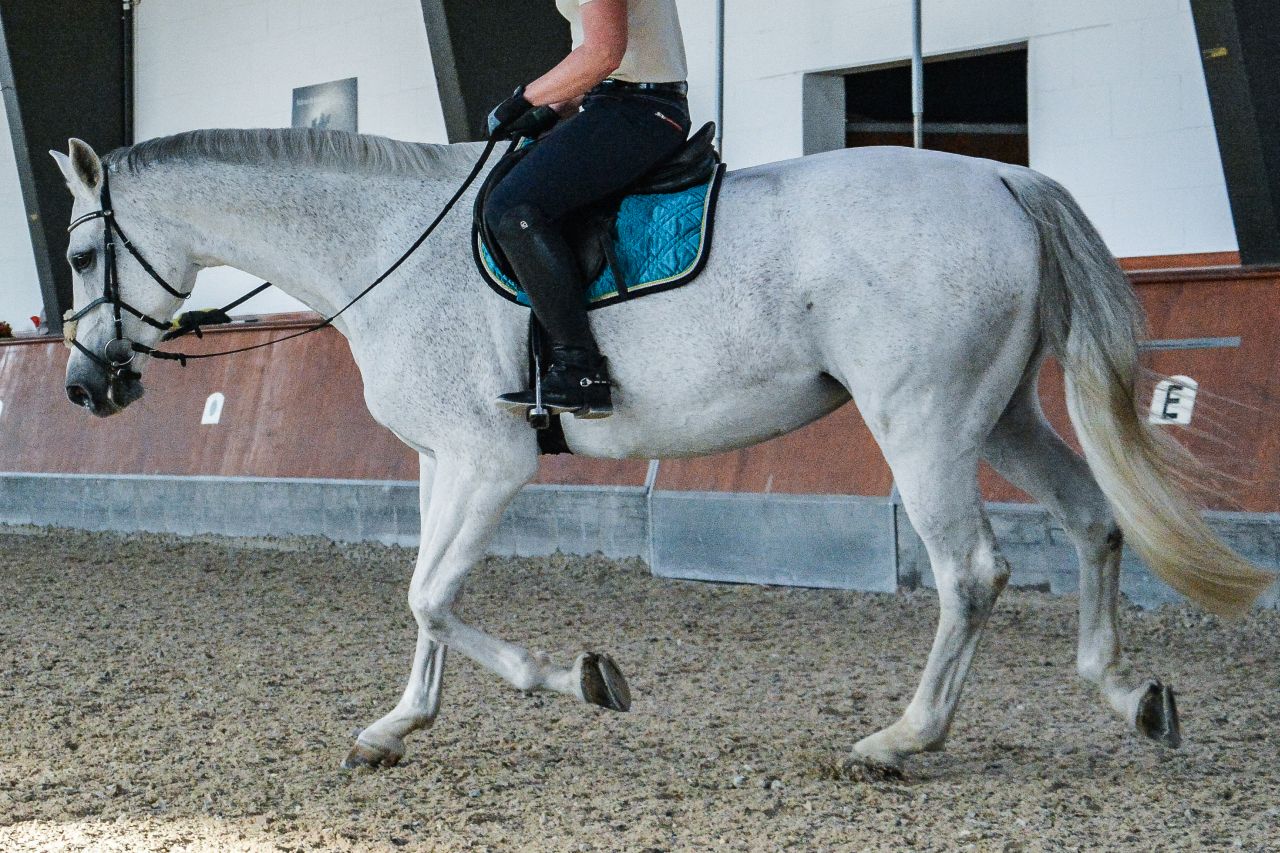 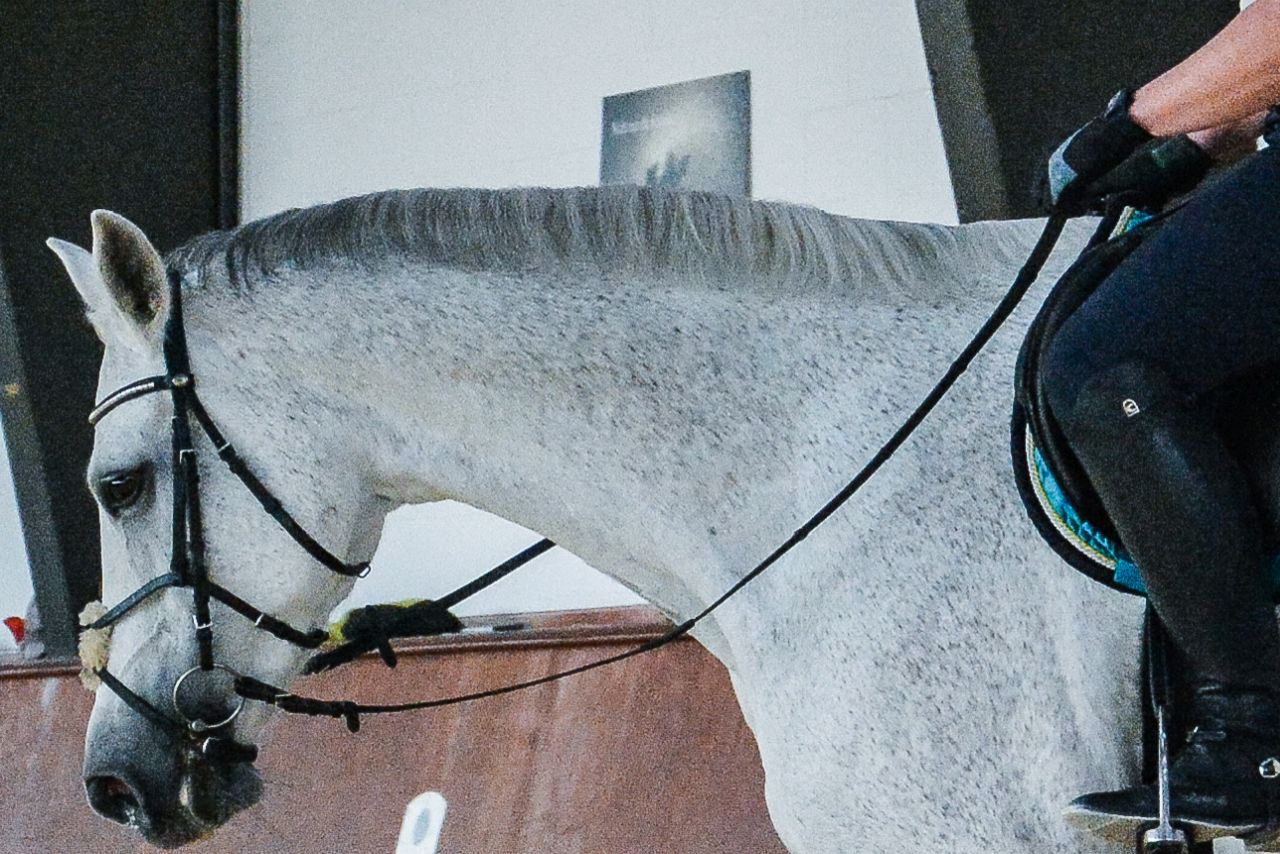 Horse with massive blockages in the cervical spine (HW 4-7) and in the area of the trunk carriers. Horse also walks without contact forward at the beginning of the warm up phase in a fixed head and neck position, even if not behind the vertical. This horse clearly shows a lack of tonus in the upper neck muscles and a sagging in the area of the withers. (Well recognizable by the indicated “Axthieb” on the detail photo). Horse runs into the ground, shoulder limbs do not reach out, abdomen hanging, fetlock joints due to insufficient cushioning of the horse’s momentum by the abdominal and diaphragm muscles. 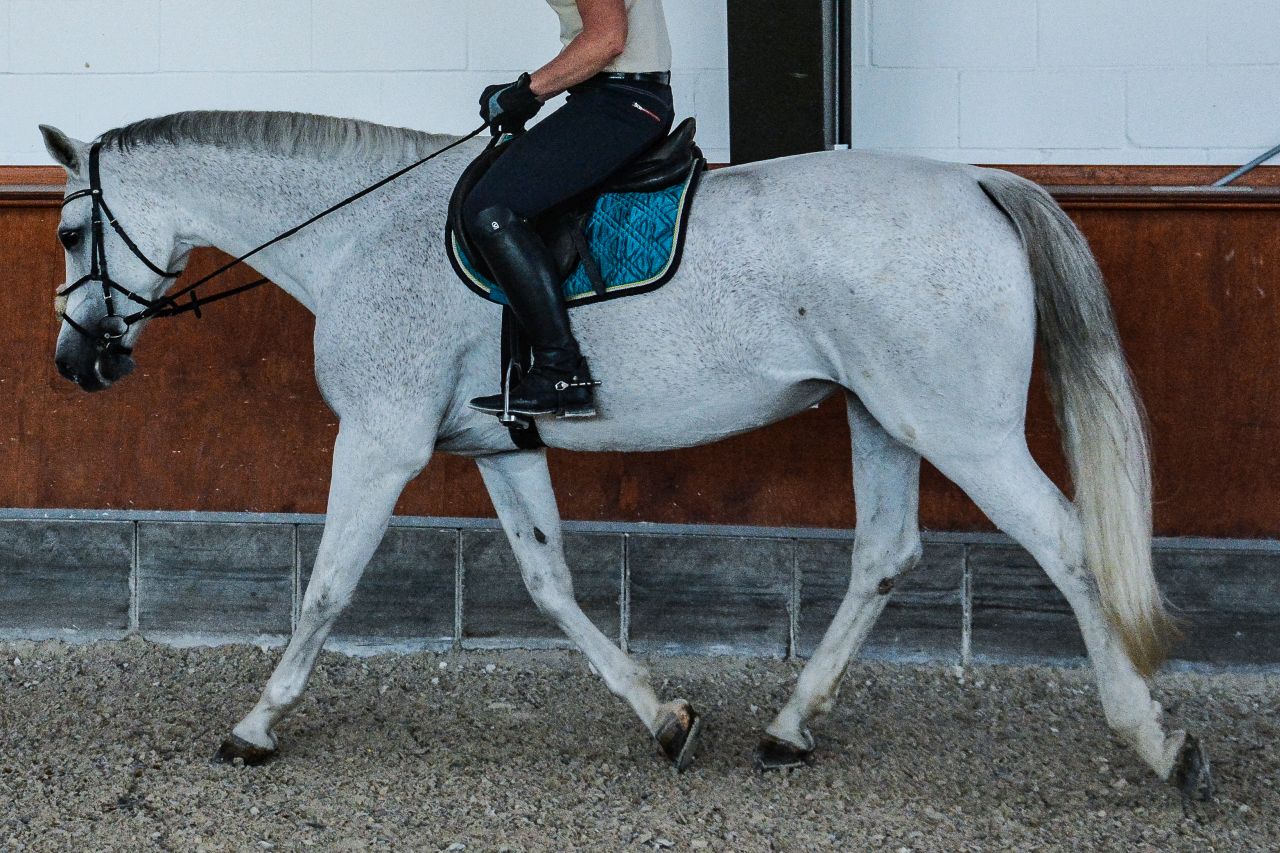 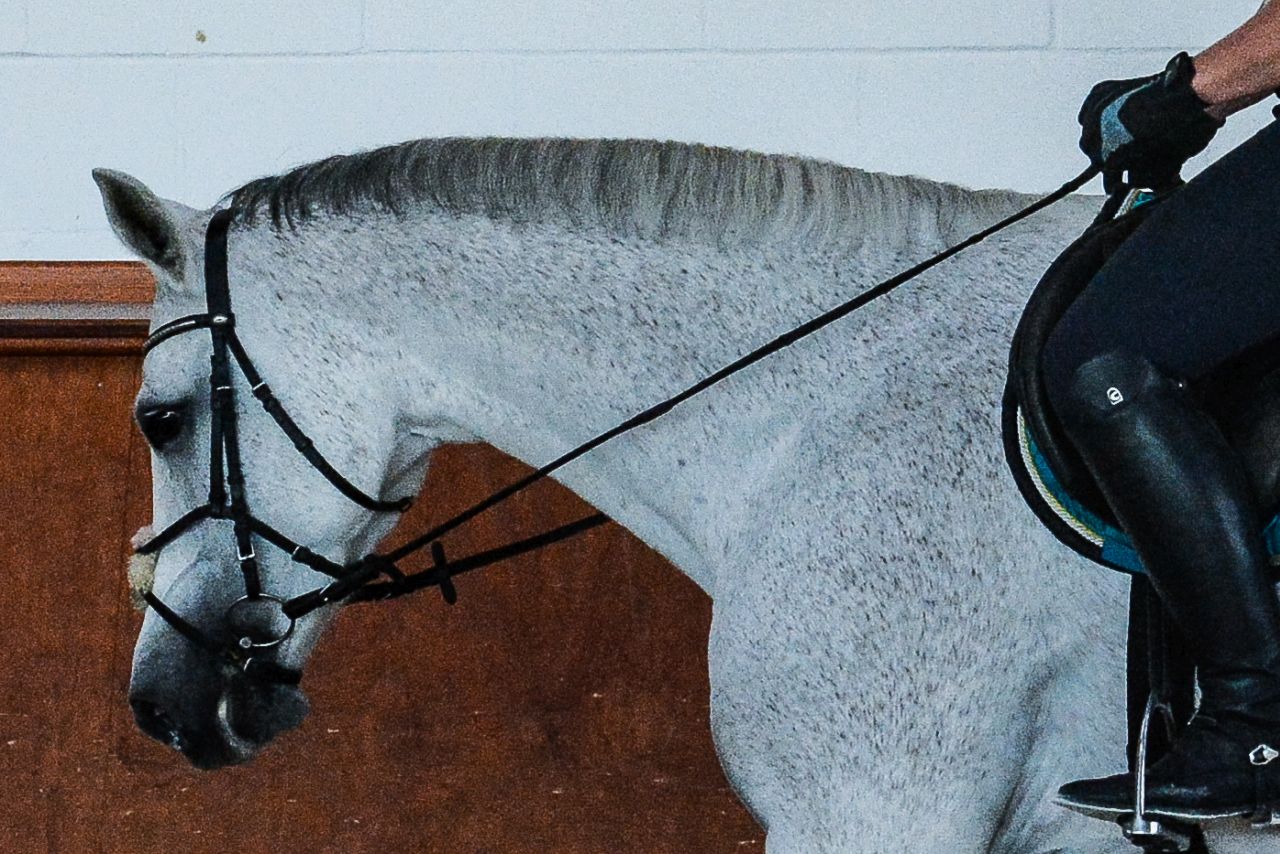 Rider under instructions: horse’s head before of the vertical, upper neck musculature active, abdominal musculature active, horse carries itself better (trunk elevation recognizable in the area in front of the rider’s hand: compared to the pictures before the correction clearly elevated). Extended reach in the shoulder limb, better weight loading in the fetlock joints. 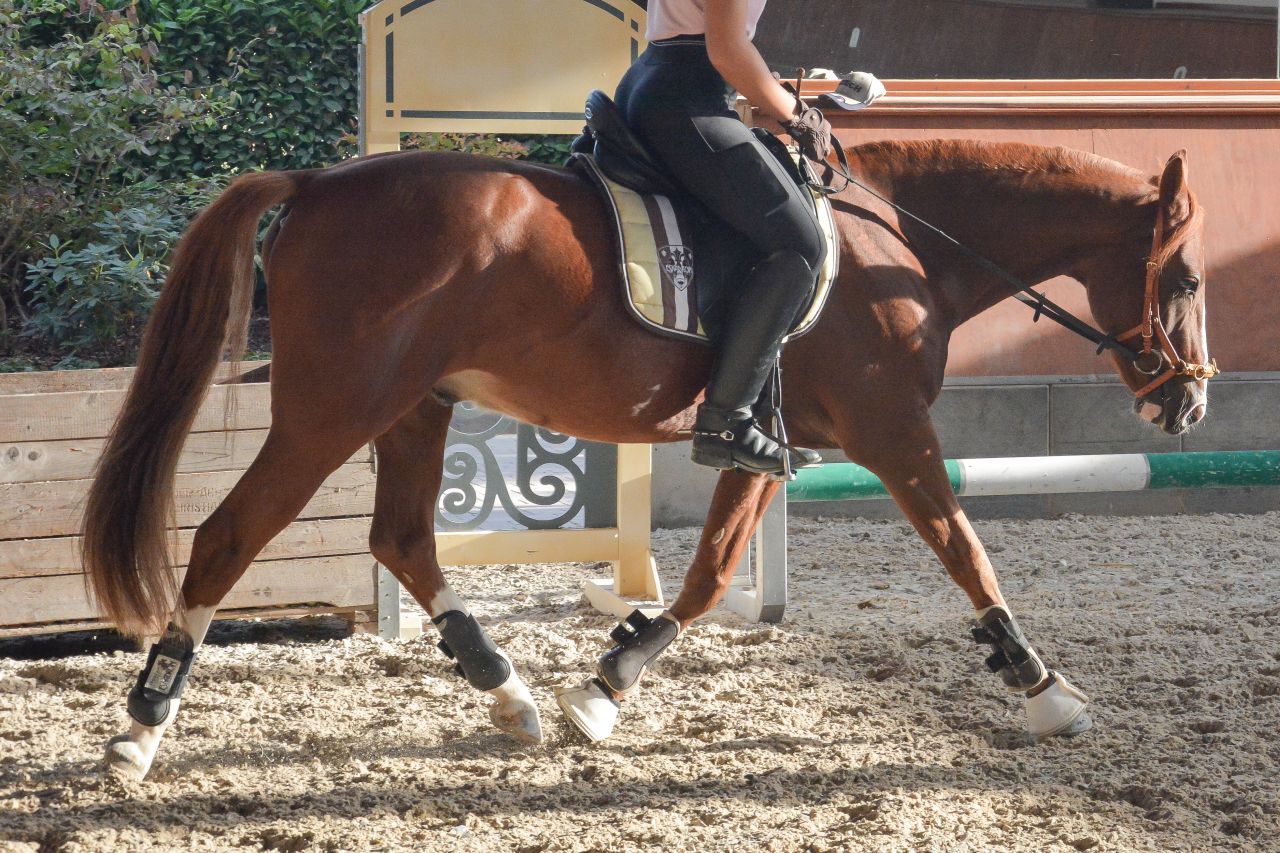 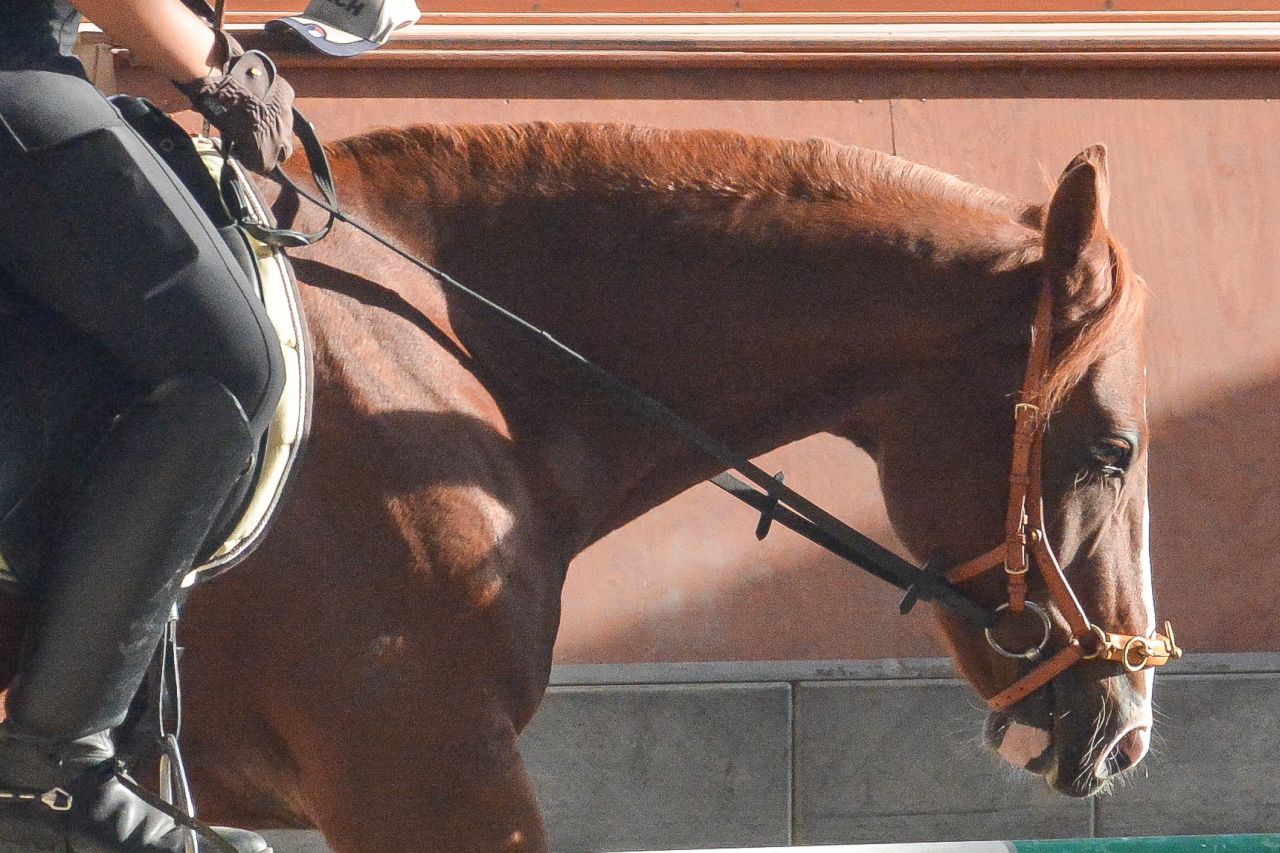